ormally, you would see Our Lady of Guadalupe paintings in some Southwestern State, usually in New Mexico.

I was surprised to see this one in the Seventh Ward. This location was heavily flooded during the storm. When I made the picture there was mud, and gravel and leftover bits and pieces covering the streets.

A few people returned to their homes and were working on them to make them whole. It’s likely that one of them sprayed out that tag on the building. That tells the tagger that somebody cares. It doesn’t stop them from doing it again, but it may make them think.

The guys who tag buildings are smart, said no one ever. They could come back and get caught in he act. No telling what would happen then if they were caught.

So, there is some CoVid-19 news in New Orleans. Apparently, the virus has increased by 53% over the previous week. It’s mostly the Delta variant. The city is talking about requiring masks in certain situations and they are thinking forward to fall when it’s likely to surge.

This fall is very busy. Voodoo Festival bowed out until next year. But, French Quarter Fest and Jazzfest are scheduled to take place over three weekends. The city said that there may have to be some modifications to crowd numbers, or — ouch, ouch, ouch — the festivals may have to be cancelled. That’ll make four tries over two years for Jazzfest.

Since none of this is firm, Jazzfest is moving head and today The Jazz and Heritage Foundation announced the daily schedules.

The biggest fear may be that if there is fall viral surge that any of these festivals could become a super spreader event.

It’s all guess work ay this point, so stay tuned.

It didn’t take much photo technique either.

All I did was see it, be surprised at what I saw, and make the picture. I got back in my car and drove away.

I should have investigated further. There are two sheets of paper posted to the left hand side of the picture, where the diagonal door is located. Those will tell you the disposition of the building.

I like to know those things in case I want to come back before it is demolished. In this case, I’d likely have had some time because demolitions didn’t start for another few years.

This building is a good candidate for destruction because the boarded up window looks like it was closed well before the storm.

One of these days I should return and find out what really happened.

One of these days.

A lot of tourists come to Louisiana for only a couple of things. They say that they want to visit New Orleans. They really mean The French Quarter, or that they want to take a swamp or plantation tour.  Swamps are just about everywhere. Plantations, at least the kind most people think of, are generally located upriver.  With the exception of one or two, most down river plantations have been destroyed by fire or water.

But, let’s not go there today. Before I really get into a plantation discussion, I have to go take a few pictures. Well, a lot of pictures.

However, I do have a lot of swamp pictures. These are just a few. They were all made in downriver St. Bernard Parish where swamps, bayous, lake water and even some salt water come together. A sportsman’s paradise. A least that’s what they call Louisiana.

A couple of you think I should do a long story about the EPA Superfund site. Thank you for your confidence and thoughts. But, I really don’t want to spend six months or a year working on a project that really won’t be seen by very many people. And, times have changed. Anybody can publish anything on the internet. That doesn’t mean a lot of people will see it. And, despite all marketing efforts, even great content has to be pulled. Not pushed.

And, that is an interesting word. Think about it. And, how you achieve it.

At the end of the day, it really means most so-called SEO experts haven’t got a clue. Heh!

Something green that comes with alligators. 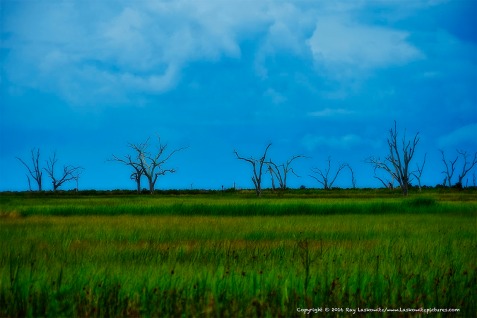 Storm damage on the Gulf.

This is New Orleans… but, first my illness. I think my body finally won its battle with the flu. Last night was truly hellish. By about 8 pm I was shaking, I was fever-wracked and my head was pounding. I wrote yesterday’s post as quickly as possible  and went to bed. Normally, I would just take more Tylenol. But, because I was also taking some OTC flu med I had to be careful of taking too much Tylenol in one day. By about 11pm, I took what little I could and tried to sleep. But, I felt like I was burning up. I had to know just how hot I was. So… we have this new fangled digital thermometer. Nobody really knows how to use it. The first time that I stuck it in my mouth, the little bell rang and I looked. 188 degrees. Oh sure. I may have felt that hot, but that’s impossible. So, I pressed some more buttons and got… 103.3. Bad enough. But, probably real. I finally fell into a fitful sleep and eventually made it to about 8am. I took my temperature again and it was 100.2. Better. I was weak, but sort of had this peaceful washed out feeling. Tonight, I’ve passed the point of the onset of fever, head and joint aches. Nothing. Just a cough. So. I think I’m on the mend… there is a second line parade tomorrow. But, I won’t be there. Not ready for anything like that yet.

Now back to New Orleans. This picture was made in Treme. Or, it might actually be a little piece of the Upper Ninth Ward. It flooded during Katrina. In order to buy any kind of flood insurance, buildings in the flood plain areas must either be elevated high enough by original construction, or be raised to meet new requirements. It appears that the owner of this building isn’t taking any chances. He’s lifted an entire building a whole floor depth. But, it seems he’s run out of funds or enthusiasm. I would too. Unless that building has some special emotional attachment to the owner, it pretty much looks likes it’s ready for that scrap heap. As far as stopping in the middle of a project goes, that’s sort of what we do. You can drive down almost any street and see a freshly painted building. Just the front. Not the sides. Drive by five months later and the building remains that way.

The picture. Once more it was one of those F8 and be there things. But, I wanted you to feel what I felt when I saw it so I enhanced it a bit — well, a lot of bits — in post production.

While I was poking around in The Lower Ninth Ward and I found that odd little house displaying The American Flag, I also made pictures of broken glass, broken windows and rusty walls. I just sort of photographed whatever I saw. When I was editing my take — no, make that curating my take — I sort of watched a little collection of pictures come together without my help. Yep. They did it by themselves. That’s probably just as well. Pictures are better at doing that than I am.

But, it seems to be a really good metaphor for the entire Lower Ninth Ward. Everything is broken. Even the newly repaired stuff.

Seeing the picture is just a matter of looking. And reacting. Post production is simple. Mostly, I just made sure the details are as sharp as they can be without looking overdone.

Okay. Usually I know something about the pictures that I publish on Storyteller. Not this time. Everything confuses me. I know this house was under some pretty deep water after Hurricane Katrina blew through New Orleans. This particular area is located on the river side of the Lower Ninth Ward. This side was heavily flooded, but not completely devastated like the other side of The Lower Ninth. These are guesses. But, I suspect when the owner was able to return, he started to remediate his house.  He must have decided to display his pride and patriotism. So he hung an American flag. You know, that sort of “don’t tread on me” thing. Something stopped him in mid-stride. I walked through the house. The back-end burned after he took down the inner walls. That may be what caused him to stop. But, again. I’m just guessing. The other confusing thing about the picture are the house’s inner walls. Those thick boards are barge wood. In the 1700s and early 1800s, barges were floated down the Mississippi River to bring supplies and people. At the time, there was no way to bring them back up river so they broke the barges up and used them for building wood. It usually found its way into many early homes. My first house in New Orleans was made of barge wood. It was finished in lathe and plaster. But, it was built in 1834. This house is much newer than that. There very earliest that it could have been built was during the very late 1800s. Maybe 1890 or so. By then, houses were framed in a more modern way. And finished with lathe and plaster. The barge wood in this house was covered with finishing wood.

The picture was one of many I made when I walked through the open door. I’m very careful about investigating old buildings. They call this an UrbEx picture. That Urban Exploration. Normally, you take certain precautions when you do this. You carry a flashlight. You usually bring a buddy. You dress in work boots or shoes. You wear thicker clothing. You make sure that your cellphone is with you. Just in case. But, that’s for walking through big buildings. Buildings like old factories. Train Stations. Hospitals. But, you can see  the width and depth of this house. That narrow door opens into what was a kitchen area and then into one more back room which could have been a bedroom. There is a bathroom near the kitchen. That’s it. I was pretty sure that I didn’t need to take all of the normal precautions. The rest was easy. Point and shoot.