ne of the benefits of having software finding old files is that they are almost new to me, and certainly to you.

I made this picture on Memorial Day 2011 in Albuquerque, New Mexico.

No worries. To me this is just about the picture, nothing more.But I do want to tell you about what I think is a very cool tradition.

Yes. Memorial Day still means what it should mean to the rest of the country. We honor our war dead. The troops that gave their all. The ones who never came home.

But, New Mexicans do something different.

They bring a blanket and a picnic and they sit near the grave of their loved on and enjoy a meal with them. There are toasts and offerings and prayers.

There is one thing which makes New Mexicans like New Orleanians. As I walked around photographing — and you know me, I want people in my pictures — they would ask me to eat with them.

I think refusing a small bite would dishonor both the living and the dead. So, I ate with whoever I photographed. Besides, we got to know each other. And, they were able to enjoy a few pictures that I sent to them.

his photograph was made with a Canon G 11. It was my picture a day camera. It was a great little camera. I wore it out. It did everything that I wanted it to do.

Many pixel peepers (folks that go too far in their technical evaluations) say that cameras like this one are not good for much more than just snapshots.

Besides, these days most clients want images for online projects. The few who want images for paper uses aren’t using them much bigger than a magazine cover. A camera with a good sensor and processor, no matter it’s classification, is just fine.

I promised you that I would publish a picture of The Holy Rosary Cemetery near Hahnville. Here it is. It’s really closer to a little town called Taft. It’s proper name is Holy Rosary and Union Carbide Complex. Some name for a sacred place, eh? Sort of like my favorite desert rest stop — “Eat here and get gas.” Only worse. Anyway. The town of Taft has an official US Census population of zero. There is also a film that has been made about this general location. It is called, “Picturing Cancer Alley.” That’ll tell you something. Here’s what it told me. There is more to this place than I originally knew. But, what I’ve learned explains why Holy Rosary Church is located ten miles upriver from its cemetery. Union Carbide bought the land and moved the church, but left the cemetery in place. In 2009, Dow Chemical who now owns the land, leaked 26,720 pounds of vaporized ethyl acrylate, a Class II toxic air pollutant, into the atmosphere at this place. They pledged $100,000 as part of any possible clean up. Boy. I’m sure glad I can Google. I’m not sure how happy I am to have been there. Oh well.

The picture. After walking around the cemetery and getting myself polluted, I decided to make a more dramatic picture than simply placing the cemetery in front of the plant. That’s what you are looking at. What I didn’t know was that very famous photographer called Richard Misrach made a picture there in 1999 that showed it all. It’s pretty much made in a straight documentary style. It’s worth a lot of money as an artist’s statement. Shows you what I know. I guess I’d better stop Googling. Yep. That’ll fix it. 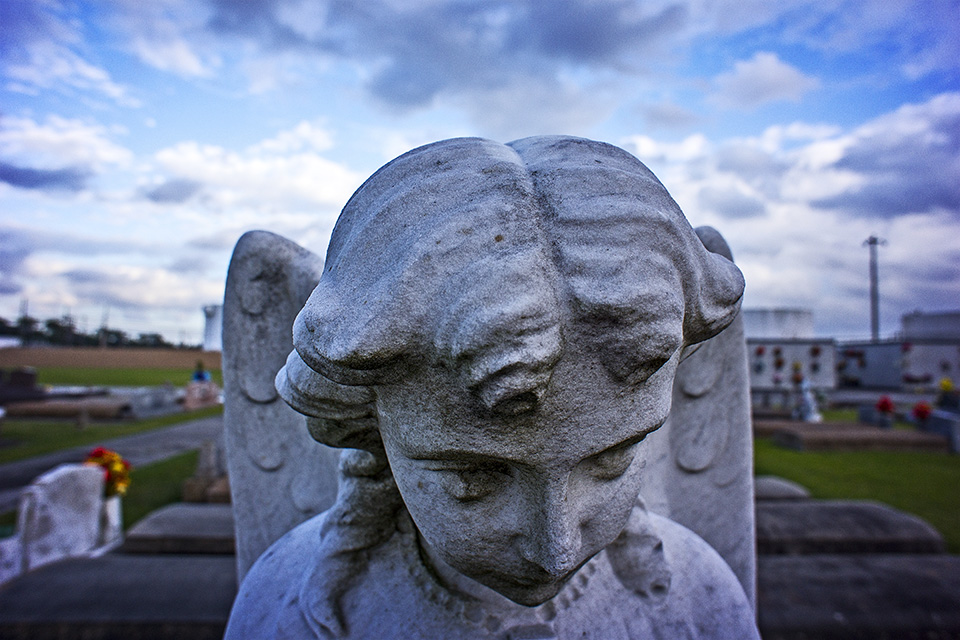