With his friend, a jealous monk.

The back of the suit. 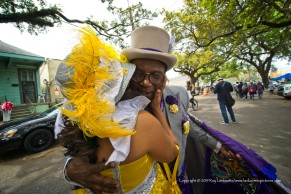 What it’s really about.

Something about the winter solstice.

The year that was. The closing year of the end of a decade. Ups. Downs. All arounds. This year wasn’t as great photographically as it could have been. That was pretty much my fault. Between physical issues and a general lack of motivation I mostly produced a lot of faux nature pictures. Some where better than others. Some are found here. My biggest natural successes were trees. They are well represented here.

I did manage to make some of  “my” pictures. I photographed second lines and Mardi Gras Indian events. Those are here, too.

The one link between nature and a kind of photojournalism is that I work the same way to make both. I walk. I see things. I make the exposure.

As far as my version of nature pictures goes, most them were made in a healthy way. The dog who sees stuff and I went for walks. Despite my physical pain we managed to walk three miles a day whenever I was home. That’s good for me and her. She’s a sweetheart. Because she’s a cocker spaniel she’s as funny, loyal, and affectionate as she can be. Cockers are notoriously stubborn. She is too. She thinks nothing of standing in the middle of the street with me in tow staring down a car just daring the car to come closer.

There are 12 pictures here. You know why.