A little clean up time.

Sometimes pictures don’t make the final cut. They are close enough. I thought I’d show you a few from two second lines that missed the first cut… a little bit. Single Ladies. And the jazz funeral for Chef Leah Chase. I thought I’d stack them up all in one big pile. Didn’t Doctor John say something like, in New Orleans nothin’ is separate from nothin’?

Maybe a Sunday second line. The Perfect Gentleman roll for Fathers Day. At 3pm. The very hottest part of the day. This was the parade that just about killed me a couple of years ago. The temperature was 114 degrees on the street. The parade was supposed to roll at 1pm. It was postponed for some reason. First, to 2pm. Then, 3pm.

I took refuge on a very deep stoop, with about a dozen other people. I tried to stay hydrated. When the parade was organizing itself, I was standing on that very hot street. I realized that my vision was getting blurry. I felt like things were moving around in waves.

Some kind of heat thing.

I bought more water, sat down in a little bit of shade. I rested for a while and gave up. I walked back to my car, turned the air conditioning on and drank more water. I went home.

That closed my second line season.

That won’t happen this year. It’s nowhere near as hot. In fact, for us, it’s downright pleasant. It’ll get a little hotter by Sunday. I won’t be bad. I, like all, the rest of us, know what to do.

I really do like this new format. Funny thing about it. I was struggling to add the details. Like buttons. Social media buttons. Translator. And, like that. I found out why I was having a hard time. It was already done. Apparently, the minute that I activated this template, everything started to migrate. It just took a little time.

If there is something that bothers you. Something that I could do better. Let me know. This is still a work in progress.

Something Bob Dylan said about his infamous “Rolling Thunder” tour. He said there weren’t enough masks. That caught my attention since New Orleans is all about masking. He added, that when a man wears a mask, he’ll tell truth. Without a mask, he likely won’t. 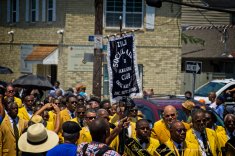 Relax! Let you eyes wonder and quiet your mind with some visual therapy. A picture is always more than you can see. Enjoy my treasures!