Here they come. From out of two doors. Hitting the street in all their finery.

They dance. They chant. They sing.

It’s a second line. It’s one of the biggest during second line season. Six divisions. Small krewes blended in with the main one. It’s a celebration. For some people, even for some photographers, this is really the only second line that matters. 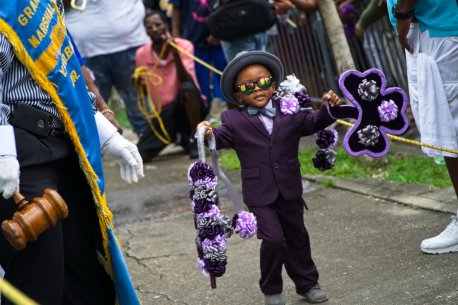 One lucky child of the future.

The pictures. Normally, I kind of experiment. With about 47 second lines during the season, there is plenty of room for mistakes. I learn from them. But, not on this day. It’s just pure f 8 and be there. I try to make the very best pictures of what I saw.  I don’t do much in post production. I am just your eyes on the scene.

I was reading another blog by a guy who is really in tune to growth. He hasn’t been blogging quite as much, which from my point of view is a good thing. He would post maybe 5 or 6 times a day. That’s too much for me. I tend not to read them or change my settings to weekly.

He said his numbers are dropping way down. More daily posts seem to equal more engagement.

Before you say it, numbers do matter if your blog is part of an overall business. I want as many people as possible to see my work for obvious reasons.

My numbers are way down too. And, I haven’t changed anything. I post once a day, every day. I won’t come anywhere near close to last years total viewers. I’ll likely be down by as many as 15,000 sets of eyes. For me, that’s a lot. I’m not talking about followers via email or through Reader. I’m talking about the numbers of people who actually looked at my work after subscribing.

What am I doing wrong?

Have I become too predictable, both in imagery and text?

Have I not been active enough on other blogs?

Are people just moving away from reading long form on blogs? One former super blogger hardly posts on WordPress anymore, but she is super active on Instagram. She says that she earns a good part of her living there.

Do I need a format revamp?

Should I take a break?

Or, the hardest question of all. I’ve been at this for seven years. Do blogs outlive their usefulness?

Courteous to your heart