Krewe of Barkus. The dogs. The people. The pictures. And, a few stories.

I had it all planned out. In my head. I even tried to photograph what I was thinking about. My lead picture was going to be the dog sniffing into the lens. Then, this picture. Then that picture. But, you know what happens with plans. Life gets in the way. Or, God laughs. Something like that.

I didn’t really see this moment when I pushed the button. But, oh man. It hit me like a ton of bricks when I was culling and editing it.

The top image. It’s an Honest-To-God picture. Not, a fun little picture that I took at a parade. It’s a strong, powerful portrait of a woman and her dog. I’m truly amazed that I took it. I haven’t made a real picture like that in a long time. True. I make pictures that I like. You like them too. I just haven’t made a picture that matters. 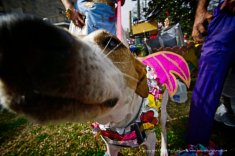 And, the dog said…

These three. Nice moments. You know me. That actual event is not the thing. I used to photograph that way. I had to tell a publishable story. I can still do that. I’d rather look for little moments that may just hang together because I made them at a recognizable event.

And, this one. I saw her walking through the shadows. I asked if I could take her picture. She said yes and proceeded to tell me her story. She’s dressed in white because she and her husband are out of mourning. Their dog passed two years ago. The didn’t even come to last year’s Krewe of Barkus. It was just too hard for them. But, this year they started feeling better. They decided it was time to celebrate their dog’s life and the time that they had with him.

There you have it. Dogs and their people.

The pictures. Oh, you know. F8 and be there. I didn’t mess with them in post production except to clean them up because this is as close to photojournalism as I’ve come in a long time. Sorry about that. I’ll do better.