I had a better shooting night than I remembered when we went to Caroling In Jackson Square. I made four or five picture that I like a lot. This is number three. The first was the hands holding Christmas songs and candles. The second, I published yesterday. And, here’s another one for today.

This picture was made where Pirate’s Alley empties into the little plaza in front of St. Louis Cathedral. During the daytime there are artists, tarot card readers, buskers and musicians working here for tips. It’s a great place to sit and eat lunch. The little bit of a column that you see on the very far right of the picture is The Cabildo. It is a museum now. In late 18th Century it was named after the municipal governing body. Yes. That’s Spanish. But, remember The French Quarter and all of Louisiana was once ruled by The Spanish. Most of The French Quarter architecture is Spanish, having been rebuilt during their rule after a major fire. The buildings toward the center of the picture facing Jackson Square are a section of The Pontalba. The apartments upstairs are the oldest in The United States. They were designed by Micaela Almonester, Baroness de Pontalba. And, you thought I have a long name. HA! Anyway, she built them in 1848 after tearing down the squalid housing the surrounded the Place de Arms, which is where Jackson Square is located. The city owns them now. If you want to live in one of them, you get on a very long waiting list. Hopefully, you will still be interested a decade later.

That’s your history lesson. I love history of just about anyplace. But, this is supposed to be about pictures. I’m thinking that maybe the pictures are about history.

This picture. Well. I was on a little roll so I thought I’d just keep using my senses and brain and worked in manual. As you know, I like to use very low ISO settings and so with this one I did just that. This is f5.6 at 1/4 of a second. Hand held. I like not using a tripod sometimes at night because my natural body motion gives the image a little extra kick. Of course, nature helped a lot by keeping the stones around the square nice and reflective. I suppose, in a lot of ways, this is my attempt at art.

Speaking about history, here’s a very cool website that is mostly about the history of New Orleans in pictures. But, it’s not just limited to New Orleans. Have a look. No. I don’t know the owner. I just like the site. A lot. 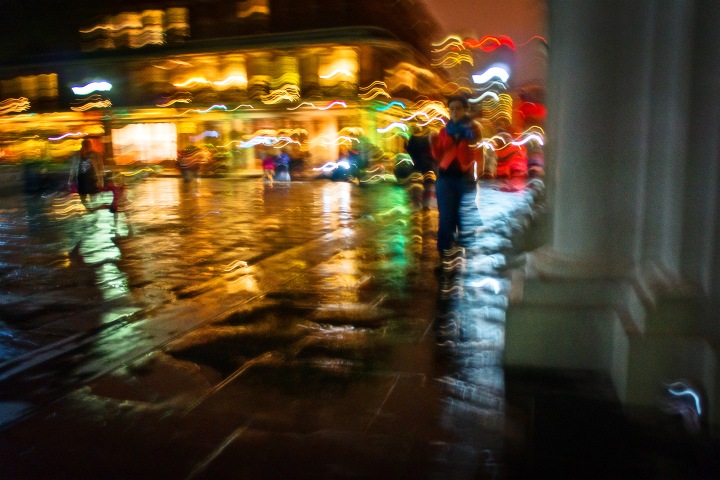 I don’t usually post similar kinds of pictures on consecutive days, but I happen to like the picture that I made in Old Town in Albuquerque on Christmas Eve. The great thing about making pictures there is that everything happens early so you can get home in plenty of time to wait for Santa with cookies and milk. Or cocoa. So, for today I won’t post any of the history and naming controversy again. Hopefully, you’ve already read that. If you haven’t, just go back one day and you’ll learn the difference between luminaria and farolito which is minimal to people like me who just find them to be very pretty and inspiring.

But, you do need to know that this picture was made on The Plaza. It’s a very simple picture. I wanted to put a luminaria in the foreground with a bit of scene drifting around in the background. So, I put the camera on the ground. Yep. Right on the ground. Then I made sure the focus and the depth of field was about where I wanted it and I pushed the button. People look at me like I’m weird. That’s about right. I am weird when I take pictures.

I’m running a little late and haven’t had time to do any new post production. But, not to worry. I always have something up my sleeve. In fact, If I’m lucky this particular picture will be part of an ASMP showing for New Orleans Photography Month. It will be hanging in a strange place. A place I’d never thought of… a hospital lobby. The more that I think about it, the more I think it’s a great venue.

The picture is a few years old. I made it in Santa Fe, New Mexico as I was leaving the plaza. And, it was one of those lucky happenings. I didn’t really have a great shooting day and I was heading back to my car when I saw this American Indian playing his wooden flute and selling CDs. We talked for a bit. I liked his songs so I bought his CD. I asked if I could photograph him. He was happy to do it as long as he could keep playing. You know that was just fine with me. I made a number of portraits of him. But, then I found the heart of the musician. This is it.

Everybody knows this place. But, they know it from a different angle. This is the famous San Francisco de Asis church in Rancho de Taos, New Mexico. Viewed from its back side, which faces the road, it is probably one of the most painted and photographed places in The United States. But, seen from the front it almost looks like just about any New Mexican church that is surrounded by a village plaza.

The picture. If you make a time exposure in deep shadow that natural blues in the cold light will appear.

However, I did enhance this image to make it look my mind’s eye saw it. Here’s the deal. When we make a picture of a scene there was something that attracted us to it. But, quite often neither a digital capture of an exposure made on a piece of film — remember that — can capture the scene as we remember it. That’s due to the limitations of chemistry, optics or even physics.

So, I chose to help the picture along in post production. There is also an opposing philosophy that says the picture should look exactly as the camera captured it. Some photographers make a big deal of that. Why? The photographer whose name everybody knows is Ansel Adams. He never left the image alone as it came from the camera. In fact, he created an entire method of developing and printing the picture called The Zone System. He sought to improve the raw image and turn it into the image he saw when he actually pushed the shutter release button.

There you have it.