Over and over. I took a step back and tried very hard to slow down. I supposed that’s easier to do when I am well rested.

For some reason after going to bed at an early time for me, 12:30am, I awoke very late at 9:40am. Everybody was up. They decided to let me sleep. Even the dogs left me alone.

I must have needed it, but I didn’t have any kind of level of exhaustion. We watched a couple of movies last night and that was it.

Normally, my mornings are pretty fast paced. Since I already was more than half way through when I started, I decided to slow down a little. Well, a lot. I decided to do what I normally don’t do.

Mornings are normally quiet. Not today. I started playing music as soon as I sat down at my desk.

I didn’t answer as many emails as I normally do. I just answered two, from a friend of mine with whom I’ve been having a long running discussion about art, photography and the meaning of luck.

Music and a discussion about art. That’s a great way to discuss the day.

Oh, and I took The New York Times Friday news quiz. The way I score my results is backwards. The fewer questions that I answer correctly the better I feel. That means I didn’t spend too much time worrying about things over which I have no control.

That’s it for now.

Layers. That’s what makes this picture anything at all.

I started with a picture of the sky. That’s the first layer and the background of the image. I had to crop it a bit because there is train on the bottom of the picture. It’s gone now.

I added the top layer which is the lawn with all those little snowball like shaped wildflowers. They are everywhere right now so there’s no way to ignore them.

Doing that also allowed more background to make its way to the top. You can see the clouds floating through the lawn.

A little sharpening to keep the flowers from looking like white blobs and I had what you are seeing right now.

Lazy day. In the middle of a three-day weekend which ends summer. On the calendar, at least. For school age children in new Orleans, summer ended a few weeks ago. For the rest of us, the hot weather and humidity will linger on, and on, and on. We don’t even have fall color according the fall foliage forecasts. If you live here, you know that’s not quite true. Especially since just about everything grows here. How could it not? Southeast Louisiana is a natural hot-house for many months of the year.

I made this picture a couple of days back as a week-long storm was blowing out. Luckily, nature was on my side. The most interesting formations waited until sunset to move out.

Once I start gearing up for the grind of my “day” job, I start missing things. Like Earth Day. Everybody seems to be talking about it on Facebook and Twitter and other social media sites. I read right through what they wrote. It didn’t occur to me until last night. Or. Tonight as I write. So. I made this picture. I made it in my garden. I made it on Earth Day. Most of you will see it on the Day After Earth Day. Sorry about that.

Photo? Technique? I intentionally overexposed the RAW file. I used a very slow shutter speed to give the image a little motion. Then I did my post production magic.

Got home. Took a drive. We hadn’t been out Highway 90 near Lake Borgne, Rigolets and Fort Pike since before the storm. You know. The storm. That’s what we call Hurricane Katrina. This entire area was devastated by Gulf water surges, high water from Lake Ponchartrain, huge amounts of rain and heavy winds. Very heavy winds. This isn’t all that far from Buras, where the storm made landfall. So, the winds around here were 125 -135 MPH.

All of the camps were wiped off the face of the earth. Businesses were washed away too. Boats? Forget about it.  Today, seven years and eight months later there are still plenty of drive ways and small roads leading to nowhere. But, people are rebuilding. There are plenty of camp houses dotting the landscape along Highway 90. They are all new. All are raised at least a story above the land and water. Some are huge. This silhouetted house is huge  when you consider I made this picture from at least a mile away. It has a covered walk way, a pier and a boat house. The  barbecue  and vehicles are stored underneath. It looks out on Lake Ponchartrain.

The picture. Well, I was following the clouds after they left New Orleans. I finally caught them just where I wanted them to be. More photographer’s luck. That’s a good thing for this picture. This picture needs clouds and a soft sunset. It was sunny, about 75 degrees with no humidity in the city. You know I can’t work when the day is pretty. I just can’t handle pretty.

So. I went out looking for one kind of picture. I came back with this. What’s a young photographer to do? Or, an old one. For that matter. The picture? Walk around and find it. When I did. I made a few frames. 158 to be exact. I got my shoes wet. And, I almost slipped in the mud trying to get to the picture as I envisioned it. This is an example of the old saying, “If the picture isn’t good enough, you aren’t close enough.” Robert Capa said that. I won’t tell you what happened to him next.

I know what I wrote. I said that I would try to publish Mardi Gras pictures from now until Fat Tuesday. But. Something happened. Nature intervened. We had about 12 hours of hard rain. I like to work in the rain. But, the lazy person in my house fell asleep until it was almost dark. Me. But, I have a little defense. I worked late and woke up early to continue working. But, still. Anyway. I looked outside and knew I couldn’t go far and still have the amazing light that I saw. So I just walked around the neighborhood. I made about five pictures that I really like in about 15 minutes. But, this one is my stopper. The thing to know about this one is that I did not manipulate the color. That’s what the sky looked like at about 5:20pm. Oh. At some point in those few minutes the light was purple, pink, lavender, orange and a little yellow.

So. That’s my excuse for not posting a Mardi Gras picture today. Nature.

Only in New Mexico. Only in the high desert of Northern New Mexico can you see a wonderful sunset and feel the rain on your shoulders at the same time. It’s wonderful. The rain falls. Hard. But you know that it won’t last long and you can get back to it. Or just get to it. I made this picture as I was getting ready to leave the state. I knew it would be a while before I would be back, at least with the time to poke around the back roads and find places like this one. And, what’s great about this road is that it is only about 15 miles west of Albuquerque which makes it an easy trip. That’s not a big deal. But, if you blow a sunrise or sunset, it’s not like you drove for 500 miles and camped out. Waiting and waiting. Instead, it means you come back the next morning or evening until you make your picture. One this evening I got lucky. Very lucky. I went out the weekend before I was leaving. I made three or four very nice pictures in about an hours time. And, that was it.

The picture. To me it means something about the great American open road. The miles go on forever. So does the view. It’s simply magnificent.  But, you need a white pick up truck to complete the picture. Technically speaking, it isn’t much. I drove out there, turned on some music and waited. When the sun and the rain started doing magic things to the sky and the scenery I started working  in a fast but measured manner. Click. Click. Click. The pictures started coming. Time slowed down. Pretty soon it was dark. It was time to go. 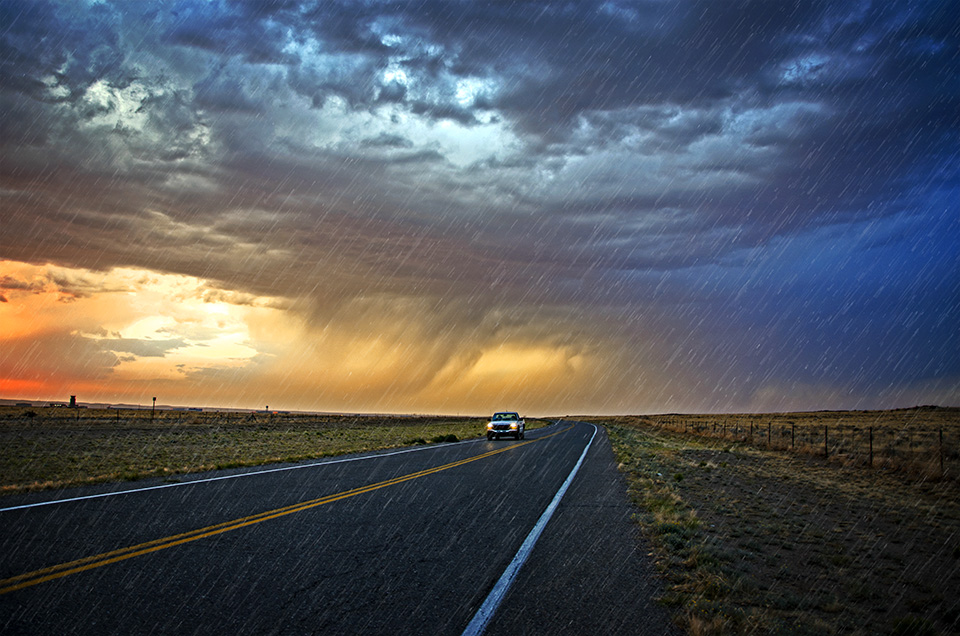 I had a weird client request. Not weird because the content requested is exactly what I like to do. I do it for myself. I like to photograph the act of traveling. Not the destination. Not the pretty beach scene. Or mountain scene. Oh. Don’t get me wrong. I do like those things. But, the  act of traveling is interesting to me.  Sometime it’s the open road on front of my car. Sometimes, it’s the old, beat up roadside kinds of stops. Or, it’s the act of boarding some kind of public transportation. Generally, I try to put myself in the middle of things. You know. Make pictures with a wide angle lens from inside of a crowd or parade or something like that, rather than photographing from outside of it with a longer telephoto lens.

This picture isn’t that. Or any of those things.

I was looking through a file called New Mexico Winter Drive. A lot of it was my usual out on the road material. But, then I stumbled on this picture and its sister, the horizontal version. I don’t really remember the circumstances of making the pictures. But, I do recall that I thought the picture would be better with a very slow shutter speed and small aperture. The result is this… even though there is a huge amount of motion which creates the blurred look, the bare tree trunks are pretty sharp and well-defined. What else? Well, obviously I added the picture frame. I also brightened and sharpened the image a bit.

It’s more about art than it is about documentation. It’s also a pretty good way to start a Sunday morning.

Oh yeah. Why was request weird? I received it by email. On Thanksgiving Day. I guess some people never close. 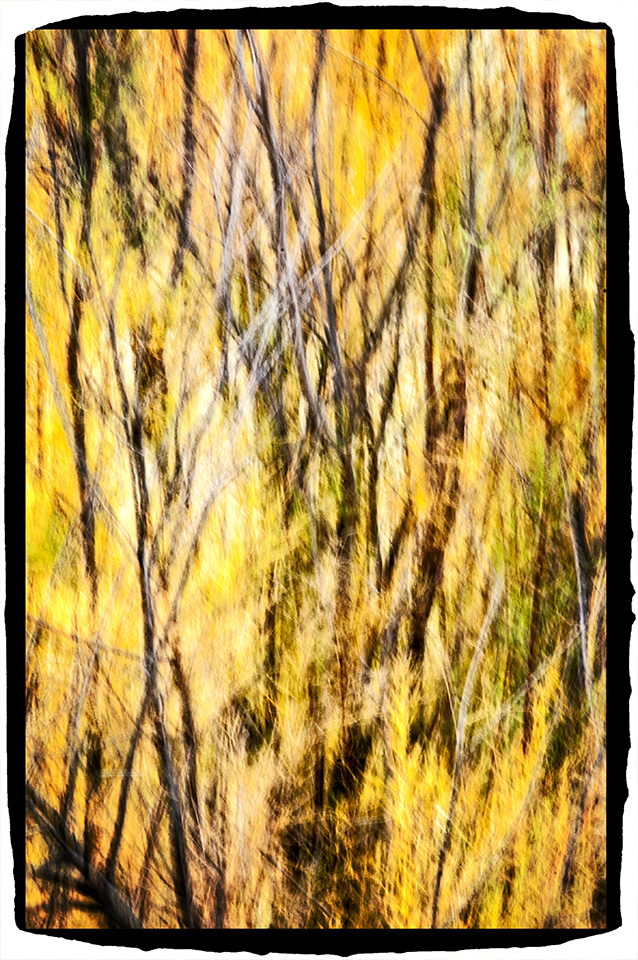 When I work on one of my concurrent ongoing projects I tend to make pictures of everything. After all, it’s the little, tiny things and the slow moments in life that make up the whole bigger thing. Here are three pictures that I happened to see while I was really doing something else. I was mostly working on summer pictures and picture a day things. Wilted flowers at a cafe. The only way to get attention at another cafe. Cool water at a French restaurant. Before you get the idea that all I do is eat… sometimes I just stop in for a coffee. Coffee to keep me going and keep my mind sharp. But, other times. Well.