Yesterday, I wrote a little about Freret Street and its relationship to Central City. I thought I’d give you all a quick look at the street and some of the things that you can see there. It’s an overview and I’m sure I’ve missed something that somebody might think is important, but these kinds of shoots are always a work in progress.

Yes. Swampy. The green man. You never know who or what you’ll run into on any typical night on Bourbon Street. I’ve seen this guy on my other romps through the jungle. But, I’ve never photographed him. It’s funny. When these street entertainers ask you where you’re from and you reply, “here,” everything changes. Now, you are cool. I guess that I’m cool. or not.

I found these chairs in Seligman, Arizona. I know, I know. Where the hell is that? Seligman is one of the last true Route 66 towns left in America. It’s located just off of I-40, east of Kingman and west of Williams. It’s almost a ghost town. But, not quite. It is a great rest stop for people traveling on I-40. It’s also a place that I’ve been passing through for well over 45 years. It started when my parents took us to the Southwest. And, I’ve driven through it from time to time since. People come to Seligman from all over the  world. I’ve heard tourists speaking every kind of language. It’s a funny kind of place. I’ve stopped there when the entire town lost power. I’ve been there when the entire town lost water pressure. And… yet, I’m always drawn to it.

More from my summer roads series. There is one problem with this picture. I’d forgotten that it’s been around a bit. When I Googled Tres Piedras his picture comes up as number one on Google images and number 9 in general Google search results. That’s okay. It’s part of my editing project so those of you who have never seen it, will finally see it. Those of you who may have seen it can have sort of an encore.

Here are some things I should have known, but I just learned. It’s located at the crossroads of Highways 64 and 285. I think that’s how I first stumbled upon it. It’s located just past the Earthship Landing Zone in Taos County, New Mexico. Figures. Well, earthships are off the grid, self-sufficient homes that are pretty much organically constructed. Sometimes they are made of trash. Actor Dennis Weaver owned one build of old tires. They seem to work well and have become very expensive to buy.

The picture obviously got a little help in post production. Lot’s of painting going on here. But, if you ask me what exactly I did, I probably can’t tell you. Sorry, but I was just experimenting at the time. No matter what I did to this picture, one thing remains. It’s old. I think I’d better go make some new summer pictures.

When I take road trips, I sort of shape shift as I work. Sometimes I try to make pictures that are a little iconic. Sometimes I try to channel my best Ernst Haas. Sometimes I look for quirky subjects. These images are quirky. There is a little twist to them. Maybe there is a little personal vision. Maybe I was just tired and a little road weary. These images mean something to me. But, they may not mean anything to you. While we say that all art is autobiographical, we also know that every makes his or her own meaning. Yu may have no frame of reference when you look at this images. You might even think, “what is this guy thinking?” That’s okay. As I said, these images mean something to me.

I was reading something in Burn magazine about “A Sea of Light.” When I looked at the images, I realized that often I shoot a lot like the featured photographer, Elena Perlino. No. Our work isn’t always similar, but I do a lot of the loose kind of shooting that she does. And, I often do a kind of image painting in the same way that she does. However, her vision and approach is much more defined then mine is. Oh well. Maybe when I grow up. I thought that I would look through my archives to see what kinds of images were similar to hers because of it reminded me of a lot of pictures I made in the past. I want to share them with all of you.

Before I got very far, I discovered this image. I made it a few years ago in New Mexico during the first year of my Picture A day project. After I downloaded it and made a proper picture I started playing with it using various plug-ins and Photoshop tools. This is the result. As far as making the picture in the field goes, it was pretty simple. I was returning from one shoot when dusk fell on this big moon so I pulled into a parking lot and quickly made a few exposures. It was simply being in the wrong place at the right time.

A year or so ago I published a little Blurb book called “Red. Red. Red.” I used it mostly as a marketing piece. But, it is still listed in the Blurb library. If I were asked what my favorite color is, my reply would be color. I like color. I like powerful, strong, bright, energetic color. I once photographed a Chilean artist who said to me, “I am not afraid of color.” Just like Ernst Haas’ words from yesterday’s post, these words stuck with me too. That said, I am mostly drawn to the colors red and purple. I’m not sure where the purple comes from except to say that in New Orleans, that’s probably a good color to like. But, red comes from rambling around Asia for 20 years. In Asia, red is everywhere. It is the sign of good luck and good fortune. It can symbolize strong emotion or passion. Hmm… No. I don’t wear either color. Anyway, here’s a little offering form the book. 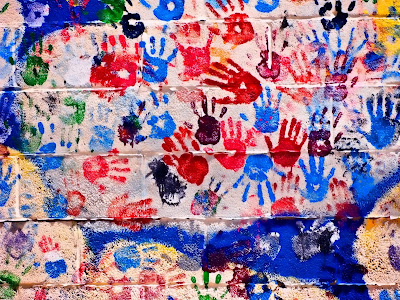 I happened to be driving down the street when I spotted this little bit of children’s art across the street from an elementary school. I don’t know about you, but I just think this sort of art is wonderful. It always brightens my day.

I posted a picture of a tagged railroad car two days ago. Here’s a detail of the work. The car has been tagged. It is rusty. It probably needs restoration. And, it is old — built in the 1940s, I think.