Red Beans Parade, on Lundi Gras. The day before Mardi Gras. This parade is ten years old. An anniversary should be reason enough to celebrate. And, it was.

Life got in the way.

On Saturday night, an allegedly drunk driver was speeding down Esplanade Avenue at what some say was between 80 and 100 mph. He hit a group of bicyclists and walkers, injuring seven and killing two. One of the dead was Sharree Walls, who was all about positive neighborhood action and sat on the board of the folks who organize the Red Beans Parade.

We did what we do best. The Treme Brass Band lead us in a dirge followed by a celebration. A kind of jazz funeral. Then we walked.

Prior to our dirge, we listened to a big brass band from California, called Mission Delirium. Wow. They were great. They were like our brass bands, but meatier. And, much more well rehearsed. Our bands sound chaotic. This band was on the money.

Then came our prayers for Sharree. Then we walked. I continued to photograph during the dirge. You know why.

The work is the prayer. It’s the thing that I know to do best in situations like this.

Most of these pictures aren’t very parade-like. You know me. I look at bits and pieces. I make portraits. I think that most events are made great by the people, not the event itself.

And, the day? Bright. But, very cold and windy. Just like today.

Playing in the band. 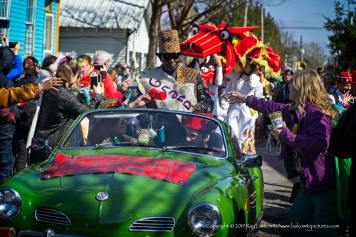