Those are the Good Fellas colors for the 2018 – 2019 second line season. You could see them coming.

Like Mardi Gras Indians, and the Baby Dolls they wear suits. Not costumes. Costumes are what “civilians” wear for Halloween. And Mardi Gras.

Heavy equals hot. At least this time of year.

Even in cooler months, their sweat drips down their faces. I’ve said it before. These guys are my heroes. I can’t do what they do. They’d laugh if I told them that. For them it’s just part of their deal. Their honor. Their pride. Their dedication to their neighborhood.

Read below for picture information. 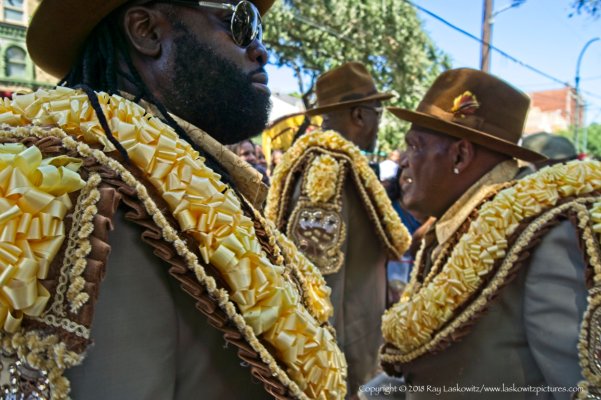 The pictures. Yesterday I wrote that I finally got smart. I guess I did. By staying on the ground I was able to photograph the children’s division. Then, I circled back and worked my way through the crowd to make these pictures.

See those two Good Fellas on the long bridge? Photographers go out there. One is on the bridge in the picture. Likely, he’s working for them. If you are out on the bridge when the second line comes off and onto the street you are trapped behind them.

Never put yourself in a place in which you can be trapped. A few years ago, friend of mine opted to work from a construction bucket. The kind you see on electric power trucks. The truck broke down. The power to the bucket failed. The bucket was stuck about 25 feet in the air. By the time it was repaired, the entire event that he was covering was over. He made one good picture and a lot of similars, but that was it. He was angry. His editor was disappointed.

8 thoughts on “Coming Out”

Words for the soul

With each passing moment, we die a little more.....