They say it comes in threes. But, three in less than 12 hours?

At about 7 pm or so I learned of the passing of David Duncan Douglas. He was, without exception, the greatest photojournalist of our time. He was 103 years old. I think he earned his rest.

At around 9 pm I learned of the passing of Tee-Eva, a Mardi Gras Baby Doll who was known for her pralines, which she sold from a couple of stores on Magazine Street. Apparently, she fell on Sunday and whatever happened took her life. She was 79 years old.

I awoke this morning to the news that Anthony Bourdain was dead. He took his own life. This is death is the one that is huge global news. I’m probably pretty sure that many of you are sad even as I write. That is how it should be.  He was 61.

He took his own life, as did Kate Spade early in the week.

I have  no words. The first two deaths were more-or-less as they should be. Life happening. But, Bourdain and Spade?

Before I write more, you are not alone. If you need to, please call this number. 1-800-273-8255. That’s the National Suicide Prevention Hotline. Somebody is there for you 24 hours a day.

Drop down below the pictures and I’ll write a little more. 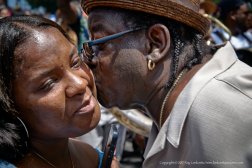 A kiss that refreshes.

Happy to see you at ‘tit Rex. 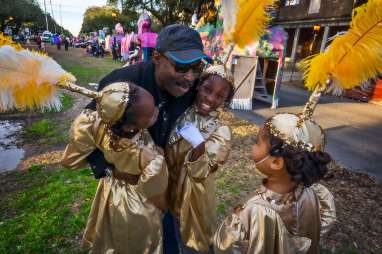 Grandpa sees his grand daughters for the first time at Mardi Gras.

One night in the French Quarter.

First, the pictures. All God’s chirren needs hugs. I heard an old Creole man say that once. I do not have one picture that sums up the past 12 hours. Even though all three of them inspired me in different ways, I really only knew one of them. I decided to poke through my archives since that’s what I’ve been doing all week. I found these pictures. They are all full of hugs, and love, and light. I need them. You need them. Today.

I can’t speak for everybody. Sheesh. Nobody can. But, I can tell you what I know. I’m pretty positive that everybody who abuses drugs or alcohol is a depressive on some level. Drinking and drugging is a way to fill a hole. Some people get sober and find ways to overcome their own illness. Some don’t. Some die way too young. And, some admit it, work hard, and mask it.

Am I qualified to write this?

26 years of continuous sobriety and study about this give me a reasonable idea. Make no mistake. I’m selfish as hell. I don’t want to die. I stay sober and study because some how, some way, a bell went off in my head. My head is pretty hard.

In all of this, I read something a little bit ago.

3 thoughts on “On Day Four… Sadness”