Once upon a time I posted a brass bands’ instruments at rest. The were lying on the street, on a curb or something like that. A number of you commented. You wondered how anybody could just lay their instruments on the ground.

Here’s your answer. They learned how to do it in high school. These pictures are from a couple of different bands. Mostly they came from the St. Augustine Marching 100. This is a big time band. They’ve played The Rose Bowl. They’ve played during half times at NFL football. The travel all over the country.

And, they leave their gear on the street. Especially when they have a long break between arrival to a parade and actually marching. After all, this gear is heavy. They march 12 miles for the length of the parade. Then, they turn around and do it the next day. Every minute that you can stay lighter matters. Just like me. Less gear means more pictures.

It matters to me in other ways. I can make some nice artistic pictures with their gear. They don’t care. They just don’t want me messing with it. That’s fine. I’m more of a photojournalist than a studio guy. But, if I did want to turn a piece of gear I’d ask a band member for help. They are happy to do it.

The pictures. The usual. F8 and be there. Or, in the case of the low light and rain, f 4.0 and be there. The rest is simple. Leave the picture as you found it. No tinkering unless it is to adjust lightness, contrast and general color.

Gear on the street. 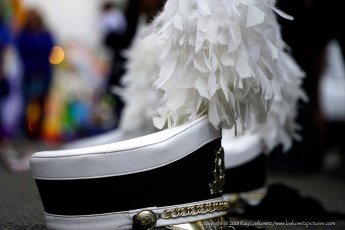