Patterns. Plastic. It might be all the same this year.

Most local media are saying this year’s Mardi Gras is one of the wettest on memory. Most national media don’t care. After all, while today is the Sunday before Mardi Gras for us. This is just another Sunday without football for the rest of the country. And, for the rest of the world it’s the end of a weekend.

That said, it has been wet. Very wet. The most annoying thing is that during some of the day, it’s been dry. Or, dryish. It has been very humid. After all, spring starts very early in the gulf south.

Then parade time rolls around. The clouds gather. The rain falls. The biggest parade, Endymion, started dry and then got wet. Very wet. I awoke this morning to very wet ground. The kind of ground you see ten minutes after the rain has stopped. I’d like to go to Bacchus this evening. It rolls at 5pm. It’s a big Uptown parade. Unfortunately, there are earlier parades on the same route which will making parking almost impossible even with my little tricks. There’s a little timing gap that you have to slip into.

And, yes, you guessed it. Rainfall is predicted.

We’ll just see what happens. At least the rain is warmish. The temperatures are going to be in the low to mid 70s. But, there are gear issues when it comes to heavy rain. Yeah, yeah. My gear is supposed to be sealed. I’ve learned in the past that doesn’t mean a lot.  There are way too many points of entry for heavy rain to find. Then, there is me. How many times do I want to walk around sloshing? After all, I did say that we weren’t even going to be in town for this year’s events.

Sheesh. Talk about my own apparent OCD.

Getting back to Endymion. It is the mother of all parades. Last year when it rolled, bad stuff happened. It got hit by a drunken driver. Many people were hurt. I’m sure that was in the back of the krewe members minds. But, the show must go on. And, it should go on.

I never go to that parade. Well, I did once. Years ago. It’s almost too big to even move around the way that I do. The crowds are very deep and aggressive when it comes to throws. However, I was reading a little bit about it. I know that it’s huge. I know that the floats are huge. I didn’t know that one float is 336 feet long. Let that sink in. One float is the length of a football field. Over 110 yards. Isn’t that something?

The pictures. This was more about old-fashioned editing than actually making the pictures in the street. There was a piece on National Geographic’s website explaining what picture editors do. They framed the discussion in my very old school way. They made clear to say picture editors are human beings, not pieces of software that you use to modify pictures.

That said, These images were made at four different parades. When the local media starting talking about Mardi Gras wet weather days, the lightbulb in my brain went off. I decided to illustrate that on Storyteller. “Weather Patterns” came into play when I realized that’s mostly what I’ve been talking about for the last few days. When a thing start repeating itself, it becomes a pattern.

Getting bagged with a little help from her friend. 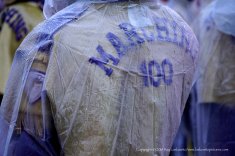 Cover them in plastic.