I’ve written about this place in the past. Mostly, I’ve posted pictures of the offerings of prosthetics and crutches to St. Roch for help with health issues. That’s generally what most people photograph when they come here. Just like most people, I’ve probably photographed the inside of the chapel five or six times. Or, seven. I don’t remember. Too many times.

A Station of the Cross. 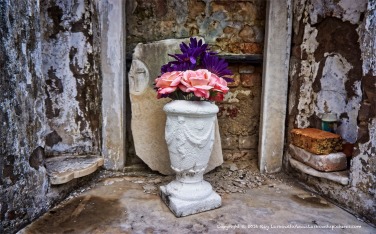 The story of the cemetery, chapel and grounds is rooted in New Orleans history. It was dedicated as a shrine and cemetery by Rev. Peter Thevis as a way of keeping his promise to St. Roch, the patron saint of good health, for keeping anyone in his parish from dying of two yellow fever epidemics in 1867 and 1878. Although the neighborhood surrounding it was flooded in the aftermath of Hurricane Katrina and there is a general uptick in local crime, the shrine and the cemetery remain a landmark. The neighborhood is not particularly safe. But, walking around inside the grounds is fairly safe. No. I’m not armed when I visit places like this. It doesn’t seem right. Somehow.

The pictures. I had plans of photographing something else. I decided that I didn’t really want to do that… after I arrived in the general neighborhood. That’ll happen sometimes. Since the weather was stunning with almost winter looking light, mild temperatures and no humidity, I started wandering around. I made a lot of pictures that day. I guess I’ve been feeling cooped up for a while and stuff just started flowing.

When I stumbled into this neighborhood — St. Roch. — I decided to photograph the grounds. All of them. This time, a little differently. Usually, I head straight to the chapel and photograph the offerings. That’s the usual picture. Even though it doesn’t look like it, that’s become the “postcard picture.”

Instead, I just walked around the entire area. Inside and out. Like many New Orleans cemeteries, it is divided into a couple of enclosures. They were built as they filled up. I walked around one and then the other. These pictures are the result of not doing the same thing. Not doing the expected. These pictures are the result of following my muse.

Follow your muse. Do something different from your usual work. From everyone’s usual work.

Child of the border

Short stories and poems about my experience with growing up near the U.S. Mexico border.

Photographer, Designer, Editor and Educator Ray Laskowitz talks about pictures and their back stories.

The world around through my camera's lens

A collection of beautiful things and thoughts