Another old frame. This time from New York City. I reckon that it’s the least that I could. I used to spend a lot of time commuting between Dallas and New York. At that time, we stayed in the Hyatt which was located above Grand Central Station. It was some corporate deal that we worked out. I also asked for a room facing for 42nd Street. Sometimes, I’d get lucky and have a view of the Grand Concourse which is where the taxis line up. So. One night I made this picture.I photographed through the window. I had no choice. Most NYC hotel windows are sealed. This picture is more a result of luck than skill. 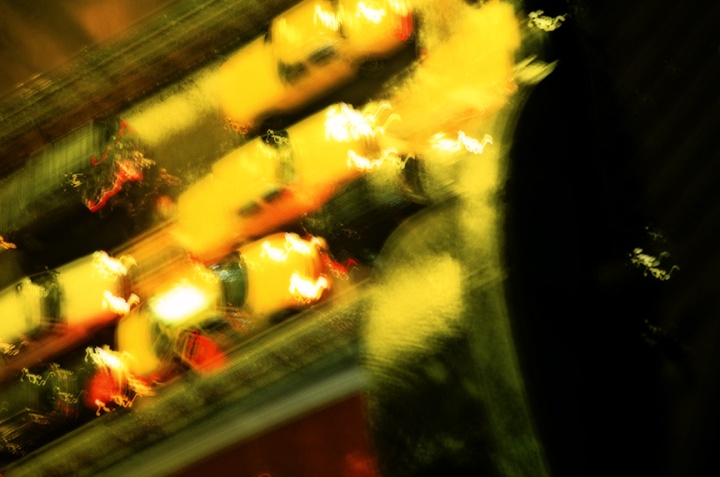 This image isn’t so much a”found” image as it is a sentimental one. Unlike so many people in New Orleans, I wasn’t born in the city. Some of my friends have family lineages that stretch back for centuries in the city. Me? I’m very lucky that I even know my grandparents heritage. I know that they came from Russia, Poland and Czechoslovakia. Maybe Germany. Maybe Austria. Although the Austria thing was more about political boundaries, then cultural heritage. Even my Polish – Russian heritage depends mostly on what day in the week it was, and when the borders shifted at some minor politician’s whim.

What I was really getting to is that many of New Orleans’ traditions are a treasure to me because I didn’t grow up with them. Many of my friends and neighbors evacuate the city during Mardi Gras. They can’t stand the crowds and the partying. Me? I embrace it. I think everything about it is very cool. While I’m not a member of any parade krewe, the way that I like to work often gets me into the parades almost by accident. How fun is that? My God daughter’s mom is a member of the Krewe of Muses, the original woman’s krewe. They are known for decorating shoes as their biggest “throw.” No, they don’t actually throw them. They are given to friends and family members. So, I can get close enough.

But, still I’m not getting to the point.

The point of this picture is that I made it on my very first Mardi Gras. I was standing on the corner of St. Charles and Louisiana Avenues, suffering from extreme sensory overload, when I decided to make an image that captures the feeling of a Mardi Gras parade. This is it. Although I’ve made some memorable Mardi Gras pictures after this, none of them top it. The musicians in my life say that they can really never top their earliest songs. They were open and free. The more that I learn and think about the parallels between music and photography, the more I think that the first picture of a particular subject is often the best one. 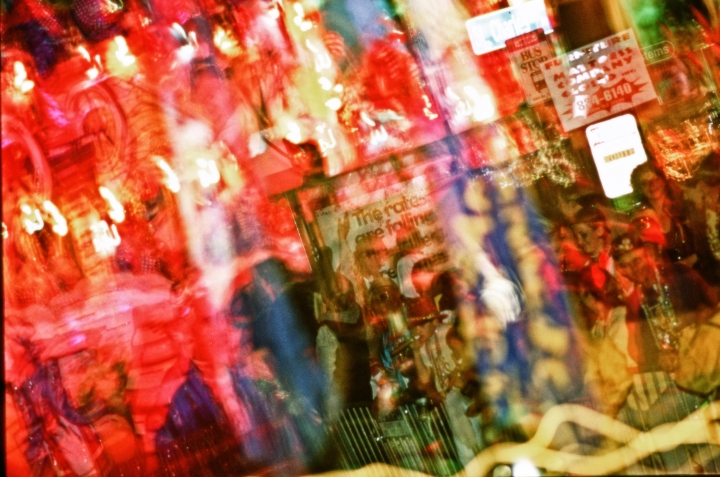 Yesterday’s post was one of my “found” gems. One of my blogging colleagues, Vera, liked it a lot and asked if I had more hidden work. The sad fact is that I do. These  pictures only surface  when I’m looking for another picture — usually to fulfill a client request. Today’s post is just such a picture. It will likely become a book jacket. It is also one of my earliest attempts to turn a literal image into something more artistic. The exposure technique is what makes this pictures. Normally, I rarely remember this kind of technical information. But, this changed my way of seeing. Simply put, in low light set the aperture at f5.6 and let the shutter speed go where it may. Also, do not use a tripod since you want your body’s natural slight motion to aid in the movement within the picture. Who taught me this? One time National Geographic photographer, Chuck O’Rear. Many of you know his work from just one picture. He made the image that was the Windows XP desktop. It’s a pastoral scene of green rolling fields, blue sky and white puffy clouds.

Anyway. Here’s my picture. I thought it is a bit timely. This is Times Square in New York. Being born in Brooklyn and now living in New Orleans, I know a thing or two about New York and I know even more about powerful storms. Please have a good thought today for the city of my birth as they wait for Hurricane Sandy to hit them.

One bit of housekeeping. I reset my blog site clock to more accurately reflect my time zone. That means my day starts at midnight, as it should, instead of 10am which made no sense to me. So, I’ll be posting as the clock strikes twelve. You know. The witching hour.

I had a request for some of my more “lyrical” images. I had to do a pretty deep file search since I usually keep my images organized by the actual shoot. Maybe I should change that and build files that reflect those sorts of themed collections. Since my files go back for years and years and years that would be a massive undertaking and it might be deprive of the joy of discovering missing gems. Well. Maybe not missing. But, tucked a way in a safe place. You know about those safe places. You can almost never find anything that is put in a “safe” place because that place is safe even from you. So, this  re-editing and creating new files will take some thought… before I even attempt it. If I attempt it. I don’t know that I want to be that organized.

This picture. I can’t even remember when I made it. It lives in a collection of images that I assembled for a nature thing I did a while back. That’s always a problem since I do not consider myself to be a nature photographer. In any way. When my pictures appear to be of nature, they were probably made in some small corner of a city or garden or something. I didn’t hike for ten miles, camp overnight and wait for the perfect two minutes of light. In my case, the light was there, The flower or tree or something was there and I saw it. I pushed the button and there it was.  So. Back to this picture. It’s a reflection. I likely saw it reflected in a light-colored car. It’s over exposed. But, that lends to the gentleness of the picture. I think it was kind of an accident.

They say “until death do us part…”  I used to know a mechanic who put license plate frames on his customers cars that read, ” customer after death” with his logo. I never understood what that meant. These two skeletons have cleared that up for me. Once you really commit to something, you should consider yourself REALLY committed. In one way or another. Or, be committed. There you have it.

Well. I promised you more skeletons. Here they are. I still don’t know any more about the people who own the house and do this. But, eventually I’ll find out. This picture relies on a little more post production than yesterday’s picture. Since, it’s suppose to be scary I grunged it up a little bit. I may not have gone far enough. That’s rare for me. usually, I go too far. Anyway…

I don’t think the creator of Popeye had this in mind when he created a spinach-eating sailor who came to the rescue of Olive Oil when she was in distress. It seems that the folks who created the  “skeleton lawn” on St. Charles Avenue kinda twisted his meaning a bit. Yes. These are eyes popping. Maybe it’s a form of Popeye… or red-eye. Or something like that.

The owners of the house located on the corner of State and St. Charles do an amazing job of decorating for Halloween. Apparently, they’ve been doing it for years. But, nobody knows very much about the people who own the house. Here’s all I know. It is located at the corner of State Street and St. Charles Avenue. It is a great addition to taking a streetcar just to have a look around the city. It’s gotten so popular that even big Hotard tour buses — like Greyhound buses — stop there and let the passengers wander around and take pictures. 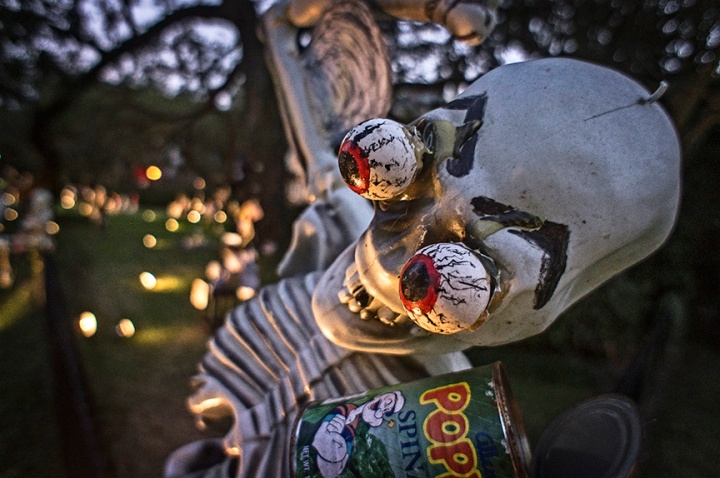 What can I say that hasn’t been said about them that hasn’t already been said? All I know is that I was very happily surprised when I was photographing Big Chief Yi, Yi, Yi at the Treme 200th Anniversary second line parade, when I felt a hand on my shoulder. The Zulu King. Here is a tight portrait of him done in my style.

If you want to know more about this social aid and pleasure society, go here.  http-::www.kreweofzulu.com:

If I tried to write just their history, you’d be reading this one post for days. By the way, if you go to the Zulu chaplain’s page, you can learn a lot about the club. I just learned that in addition to the position of king, they have the position of big shot. We certainly could use more of those. Could you imagine this? “Ladies and gentleman, “The Big Shot of The United States of America.” Certainly couldn’t hurt. 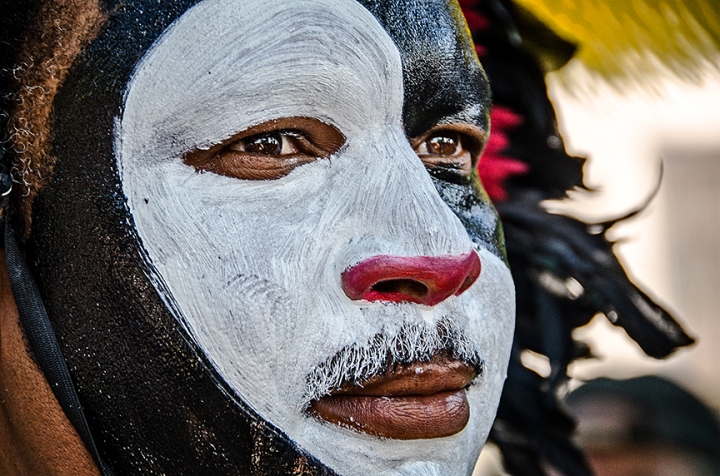 And, sooner than you think. Halloween is popping up everywhere in New Orleans. 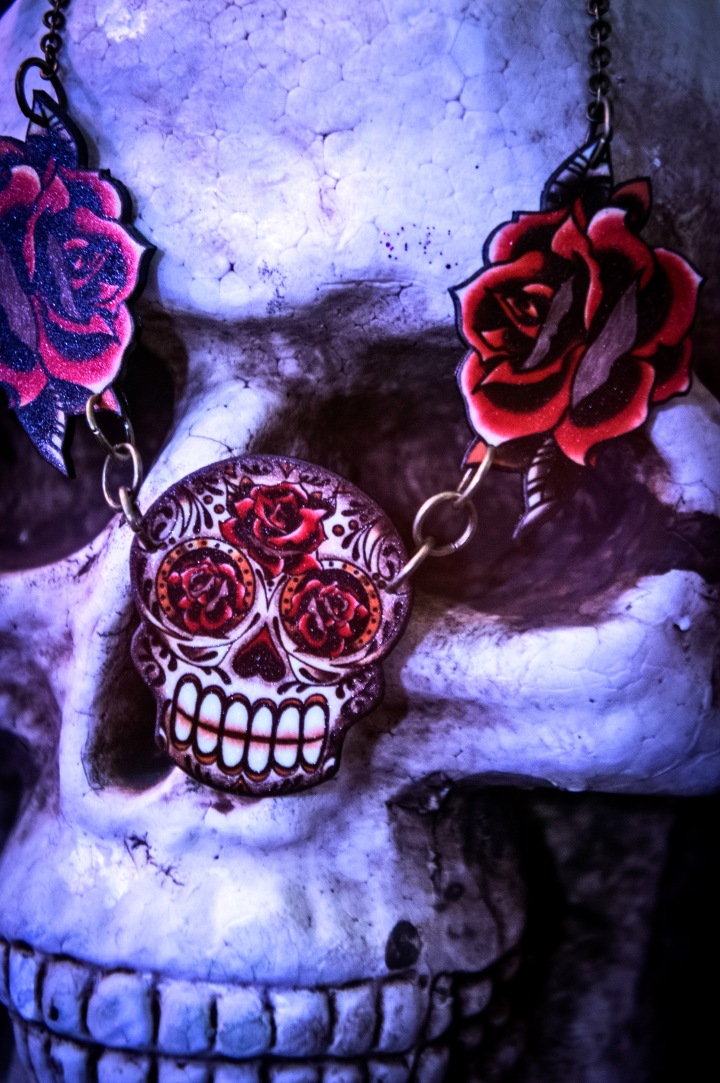 because anything is possible with Charisma

My Sometimes "Once in a Blue Moon" Blog