So, I took my friend and writing partner to Cafe Reconcile in Central City. I could write reams about it, but he’s better than I am at that, so I’ll let him tell you about it on his blog once it’s written. I’ll post his blog site address then. But, in a nutshell it’s a restaurant that was started to teach youth who are at risk a viable skill. They can learn to cook, run the front of a restaurant, and — in general — learn all the skills that it takes to run or be employed at a successful restaurant. If you’d like to learn more, go here http://reconcileneworleans.org Even better yet, if you happen to be in New Orleans, go there. The food is excellent. It’s Southern Soul Food. It will fill you up and make you smile at in one go.

This picture is just one of many that I made there a few days ago. This is Chef Harold.

I thought I would post the tight portrait of Harold. I had a hard time selecting yesterday, so maybe you should see both images. I’ve got some more reporting to do on Central City, so I’ll leave you with that for today.

I thought that I would give you a look at some of the places where I’m working on my Central City project. There are some pretty good overalls, but I really wanted to show you yet another person who lives in the area while combining that with the place. This is Harold. Working with him was sort of funny since we’d been eyeing each other from a distance before we actually started talking. I learned something from him that I’m not sure many New Orleans people know. Well, wait. I knew there were neighborhoods within the general area called Central City. But, I didn’t know that there were historical names as well. Some people call part of it Faubourg Lafayette. I knew that. That’s the closest area to the Central Business District. But, wait. There are two more that border St. Charles Avenue. They are Faubourg DeLassize and Faubourg Livavdais. These are old French names. I doubt very many people ever refer to them these days. Both DeLassize and Livavdais are areas that are a little more quiet and apparently a lot less violent. I made this picture in Faubourg Livavdais. It’s still not paradise, but my internal bells did not ring. So… this picture is just me taking some time to talk with my subject. I made some very tight portraits that I like as well. But, this one gives you a nice sense of place. 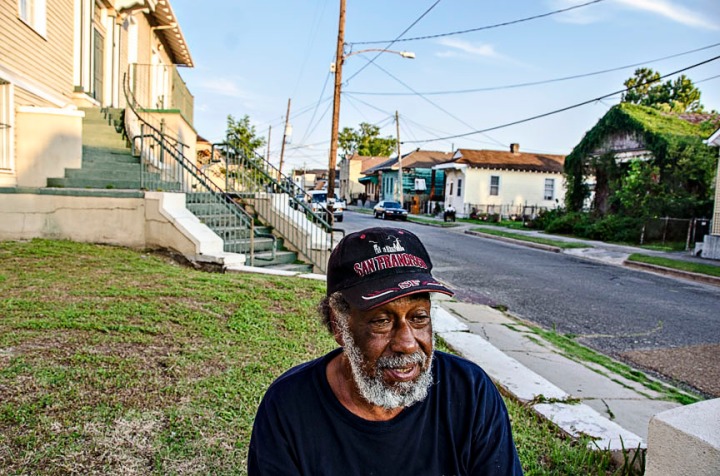 Despite its bad reputation, there is a huge population of people who have lived in Central City, New Orleans, for most of their lives. They, too are worried about the violent crime and what will become of them if Ventral City is actually turned around as many folks are hoping and planning. This is one of those long time residents. Meet Arthur Lee. I met him while I was photographing an abandoned Catholic church. He told me a bit about the neighborhood, what it was like, what it is like today and what it could become. 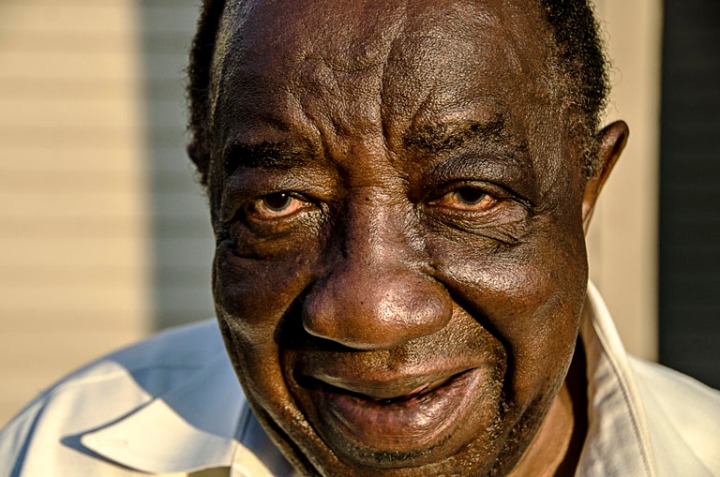 That’s the title of a very old song. It’s also one of many pictures that I’ve been making on my Central City project. Before I post, a few stories. Central City is located roughly in the center of New Orleans. It’s boundaries seem to expand and contract depending on what map your read or who you talk to. But, for my project’s purposes it is bounded by Louisiana Avenue, Claiborne, I-10 and St Charles Avenue, although the house and buildings of St Charles Avenue look nothing like most of the housing stock in the heart of Central City. Today the area is crime ridden and down trodden. But, once, it was the heart os business, commerce and architecture. At one point in its history, Oretha Castle Hailey  Blvd– once called Dryades  Street — was second only to Canal Street. Because this area is located on a rare piece of high ground which means much of it did not flood during Hurricane Katrina, a lot of attention has been called to it. There are new condo developments, there is a lot of interest in restoring the once proud Oretha Castle Hailey Blvd back to its grand status and there seems to be a lot of interest in making the district livable again.

So. My project is about rebirth. There is a lot of talk about whether it is possible. Some say as the area is re-populating the crime rate is rising. Others say in ten years time, the area will be thriving. After all, it is the only neighborhood from which you can walk to The MBZ Superdome. Time, hard work and luck will tell.

This picture. There is a gym that is probably only for the hardiest of gym rats called Friday Night Fights based on its reputation for holding a big event called — you guessed it — Friday Night Fights every couple of months. I went there to make a few pictures This is one of them.

I case you are wondering there will be a lot more pictures and a lot more stories to tell as this project progresses.

I was in a local grocery story when this guy comes in with a beat up old guitar and starts playing Beatles songs. He was actually pretty good. Nobody made a move to stop him, not even store management. I thought that was great. Let him play. Oh. This is an i-Phone picture. They say the best camera is the one that you have with you. This picture might prove that point.

Yes. Swampy. The green man. You never know who or what you’ll run into on any typical night on Bourbon Street. I’ve seen this guy on my other romps through the jungle. But, I’ve never photographed him. It’s funny. When these street entertainers ask you where you’re from and you reply, “here,” everything changes. Now, you are cool. I guess that I’m cool. or not.

Everybody around me — myself included — was grumpy. So, we went to the French Quarter. I don’t know why. We just did. We ate at Maspero’s. The real one. The one that is supposed to be a tourist trap. Not the one on Decatur which is supposed to be good.  Surprise. The food was good. The waiter was a good guy. And… they gave us 15% off for a locals discount. I’ve never gotten that in any French Quarter restaurant. But, this post isn’t about the food. It’s about the quarter. It was roaring on a  hot early summer’s night. I mean 92 degrees at 9pm is hot, isn’t it? Every place was busy. We started down Bourbon Street, got bored, made a right turn on Orleans toward Royal and I stumbled into this picture.  I wasn’t heavily armed, but I was carrying my semi-new Sony NEX5, which I think is a great little camera. A few minutes of post production later and here it is. Oh yeah. This is the back of the St Louis Cathedral. Looks a like like Paris to me. Someone told me the reason for the crowds is that there is a giant Baptist Convention in town. Yeah. Like the Baptists are going drinking on Bourbon Street. Good one.

Following yesterday’s post, I thought another simple picture was a good idea. This one was made along the Bosque near Albuquerque, New Mexico. 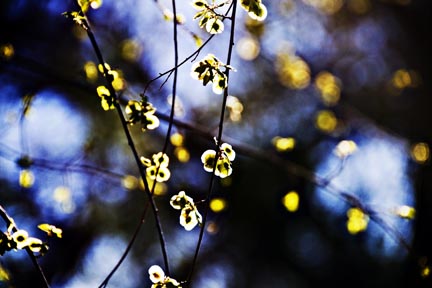 Child of the border

Short stories and poems about my experience with growing up near the U.S. Mexico border.

Photographer, Designer, Editor and Educator Ray Laskowitz talks about pictures and their back stories.

The world around through my camera's lens