A year or so ago I published a little Blurb book called “Red. Red. Red.” I used it mostly as a marketing piece. But, it is still listed in the Blurb library. If I were asked what my favorite color is, my reply would be color. I like color. I like powerful, strong, bright, energetic color. I once photographed a Chilean artist who said to me, “I am not afraid of color.” Just like Ernst Haas’ words from yesterday’s post, these words stuck with me too. That said, I am mostly drawn to the colors red and purple. I’m not sure where the purple comes from except to say that in New Orleans, that’s probably a good color to like. But, red comes from rambling around Asia for 20 years. In Asia, red is everywhere. It is the sign of good luck and good fortune. It can symbolize strong emotion or passion. Hmm… No. I don’t wear either color. Anyway, here’s a little offering form the book.

After what seemed like months of photographing all things Mardi Gras, I realized that I was a little burnt out especially after the last few weeks. So, I’ve mostly been spending my time editing, or curating as it is called theses days. For post production, I’ve mostly been cherry picking for this blog and other quick projects. But, today starts the real work. In the meantime, I decided to hang out close to home, recover from long hours and make my PAD pictures in my neighborhood. That’s Picture A Day. Fortunately for me, the New Orleans spring seems to be emerging in full force so I switched to a macro lens and started wandering around making soft flower pictures and channelling my inner Ernst Haas. For those who don’t know, Haas was one of the fathers of modern color photography. I was lucky enough to be his assistant when he gave a workshop years ago. He said one thing that has stuck with me for almost 30 years. When asked about the technical aspects of his work, he replied “that’s just stuff, anyone can learn that. We are here to talk about pictures.” Unfortunately, he passed too young. He was 58 years old — the same age that I am as I write this — from a brain hemorrhage.

Enough of that. These painterly images are an homage to Haas, I suppose. Although, I’ve been photographing for myself this way for so long that I pretty much have ingrained his words into my pictures. So, perhaps, a lot of my work is an homage to him.

Here’s a little know tourist tip from me — a local. If you need a quiet place to just sit and recharge your batteries, maybe use a clean free bathroom and learn a little history of the the area and The French Quarter, try stopping in at the  Jean Lafitte NHP and Preserve French Quarter Vistor Center. It’s located at 419 Decatur Street, which makes it upriver from many of The Quarter’s attractions. But if you are walking around on a busy Mardi Gras day or a sweltering July summer’s day it makes for a great and quiet break. Oh. There is a cigar store about two doors down where you can watch cigars being hand rolled. You can buy a few cigars and strut around the upper Quarter feeling great. 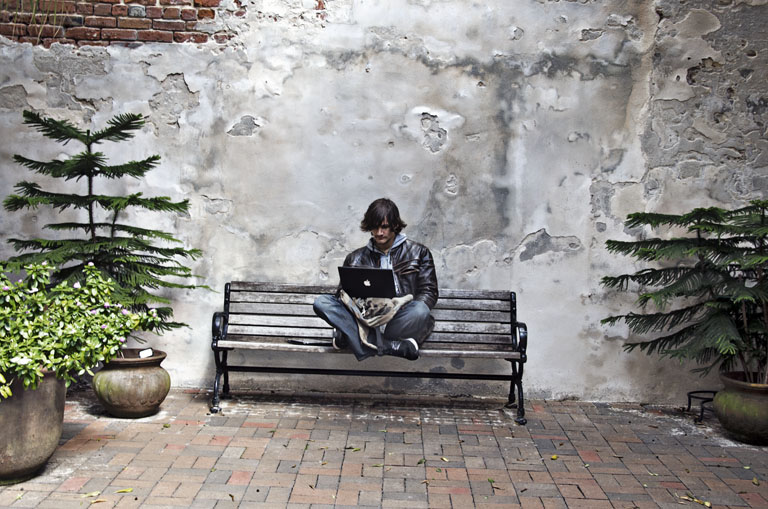 All of that said, I took a break there on the Sunday before Mardi Gras and found this guy there working away on his very ancient Mac. Yep. He found a quiet place to sit and work.

I wrote in an email to a friend of mine, that after a decade and two weeks of photographing night Mardi Gras parades, I finally figured out how to do it. He got so excited that he drove down to New Orleans from somewhere between Dallas, and Fort Worth, Texas to photograph a bit of Mardi Gras for one day. Of course, for him, Mardi Gras was just a sub text. He was really chasing a decisive moment. From what I could see on his camera’s LCD, he captured a lot of them. Oh yeah. This friend’s name? John Fulton. He’s the master of all things photographic at The Boy Scout publications. I think that he drove for about 18 hours to photograph for about a total of 12 hours.

Anyway, back to the original premise of my post and the title.

For the most part, parades of any kind are like a lot of the news you read or view. Recycled. The same content year, after year, after bloody year. It’s what drives newspaper photographers to find newer and greener pastures. There are often only so many ways to make a different picture of the same event. You either look for a decisive moment, or you move on to something else. As National Geographic’s Jim Richardson says, “if you want to take better pictures, stand in front of better stuff.”

So. This is my first year back to New Orleans after about a six-year exile in New Mexico after what we call, “the storm.” That’s Hurricane Katrina to the rest of the world. Yes. I know, I know. “Exile” to New Mexico? It’s a beautiful place, but I never really seemed to connect there. And, that after traveling there for probably 25 years. But, I was excited to cover as much of the carnival season as I could, even though I knew I might be making some of the same pictures I made years ago.

Once again, back to the topic. I got too much sleep last night. I’m verbose. 🙂

Since parades generally look the same, I started messing around with other ways to capture what parades are really about. What are they about at their most basic level? They are celebrations. They are about motion and light and energy. They are about connecting with something bigger than yourself. They are fun. So, I started working on that… of course, this little bit of inspiration came during the last two night parades of the carnival season. Proteus and Orpheus. But, that’s enough. It got me there. First, I stopped trying to be sharp. Not every picture has to razor-sharp. Then I got into the crowd as up close and personal as I could. Then I worked with only one lens, an 11-16mm f2.8 Tokina beauty that forced me to work very close in order to fill the frame. Then I changed every possible angle.

Some of the results are shown here, here and here.

A little story. I was photographing the Krewes of Proteus and Orpheus, which were the last two Uptown night parades, when I spotted this group of young people waiting for the parades to begin. They were having a great time. They were singing, laughing, hugging and dancing to the music that was being played from the roof of a local restaurant. Turns out that they were all college freshman who had gone off to school after spending their elementary and high school years together. The were reuniting at Mardi Gras. They were hard to photograph, but when the music started plying and they were all dancing in the middle of St. Charles Avenue, I managed to shoot this little sequence of images. No. Not all of the pictures

are as sharp as they could be. But, as they say, “sometimes your best picture isn’t your sharpest picture.” For me, it seemed that this is the spirit of carnival. Families and friends being brought back together in joyous celebration.

When Mardi Gras draws to a close some folks wished that they hadn’t partied so hard. They may do so for a few weeks. Some folks, like me, worked very hard and are recovering from long hours and lots of walking. There are others who planned parties and participated in one or two particular events. No matter which group a person falls into, there is a certain bleakness that comes on the day after Mardi Gras. I drove around the city a bit yesterday and it just felt different. Even during the rain and postponement of some parades there was a sparkle in the air. But, not yesterday. Since many of my pictures at their best are about how something feels, I guess that I’m in tune with it. I didn’t really photograph very much yesterday. Just enough to fulfill my picture a day project needs. I guess I’m a little burnt out after making some 220 gigabytes of images over the last few weeks. Now, the hard part begins. Taking and making pictures is easy. That’s fun. Editing and post production is real work. I’m trying my best to put it off…

While I was working Mardi Gras 2012 in New Orleans, I started making the occasional snap of people taking pictures of the events around them. It was nothing intentional until I started doing very cursory edits of my work mostly to check for technical issues. I noticed a nice, little group of images that formed an simple essay with a little editing, er, curating. Or, something.

Aside from the images, I’m not really making an editorial comment. Although, I did notice that on both Facebook and twitter people were posting a huge amount of “I was there” pictures from Mardi Gras. I don’t know if that’s good or bad. From my own personal standpoint, it’s great because when people look at my work — or any other working professional photographer’s work — they now are gaining an understanding of just how hard it is to make a good picture. On the other hand, I have to wonder how many people think, “that’s good enough,” and never think twice about having someone who works at image making do a job for them… because they can do it themselves and it will be “good enough.”

I did the only thing I could do. I joined a parade and marched — not rolled, there are no floats on Royal Street — with the Krewe of Resentments. This gave me the opportunity to work tight and close. How close? This close. I made this picture with a 16mm lens. She seemed to enjoy herself. I did. Actually, I walked with three small krewes. This one. Pete Fountain’s Half Fast Krewe and of Krewe of Saint Anne. They walked through the Marigny and through The French Quarter on Royal Street. Lots of walking. 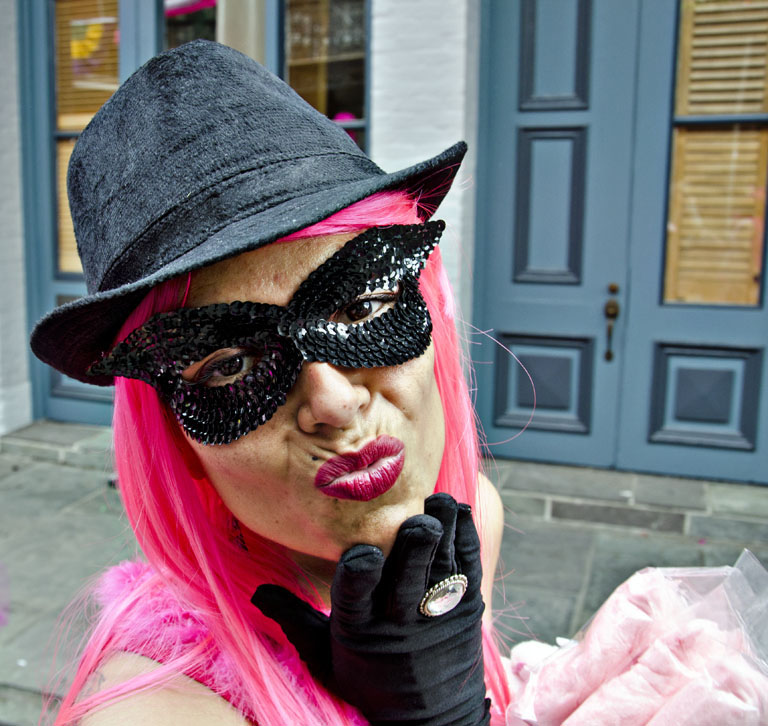 Just so you know. I have a huge amount of Mardi Gras images. I’ll post a few more before I fully close the books on Mardi Gras 2012. At least on this blog.

Courteous to your heart