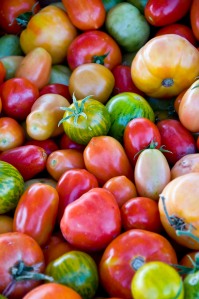 As late spring turns into summer in New Mexico, the local farmers markets begin to open. Generally each of them only opens on one day of the week. You can buy local farm produce of all kinds — tomatoes, chilies, peaches, strawberries and even blueberries can be found at the various markets. One of my favorite markets is the one found in Los Ranchos near the Rio Grande River. It’s open on Saturday Morning. It’s located in a part of regional Albuquerque that feels like I want New Mexico to feel. During the summer months you have to get there early since it closes by noon because of the heat. Getting there early assures you of the pick of the crops for that weekend. 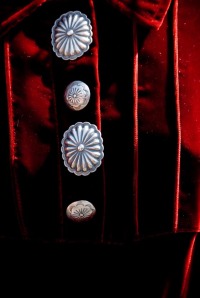 The Indian Market comes to Santa Fe in July. No, no, no… you are not buying Indians. You are buying Indian art, like these sterling silver squash blossom button covers. These particular pieces of art were photographed on an artist who was also wearing a red velvet shirt. It’s an interesting event and some 40,000 people visit per day. It pretty much takes up all of the central area of the city including the Plaza and many side streets. Of course, there is nowhere to park. But, the even is well worth the time to look around and visit with the artists and craftsmen who come from all over the Southwest and the rest of the country. There are many of great photographic possibilities as well as plenty of opportunities to buy far more stuff then you need.

I have a little assignment to shoot the churches of New Mexico. Luckily, from a cultural standpoint, this interests me a lot. New Mexico, because its history is a very Catholic place. Seems, that I keep picking places that have that. New Orleans was the same way. Good think that I’m Catholic. Well, sorta… To me, there is a certain beauty in ancient churches. 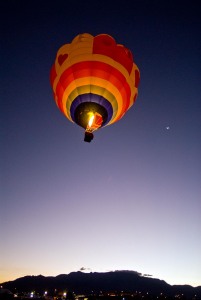 New Mexico’s spring weather has finally gotten back to something that seems normal. After a few weeks of very unseasonable highs, we had four days of clouds and rain. Then came a “cooling down” period — as the weather guy says. The minute that happens, it seems that we start getting a lot of early morning balloon flights because the wind pattern called “the box” is reconstructed. The box is cooler air that flows downward into the valleys and near the Rio Grande. It occurs in the morning. It is quieter air. And, it is very good for balloonists. It is also one of the reasons that the International Balloon Fiesta is held here in the fall. Not only is it good for balloonists, but it is good for photographers who want to make pictures of ascending and floating balloons. I’m one of them. Balloons make me smile.

Yesterday’s services at the Veteran’s Memorial in Albuquerque where mostly about honoring the remaining WWII vets. My dad was a WWII vet. That got me thinking about the last place my parents lived. Reno. Nevada. The World’s Biggest Little City. Home to the collectible car rally called Hot Summer Nights. Gambling. Virginia Street. Changeable weather. My parents decided to retire in Reno when they grew tired of Long Beach, California. I suppose that they liked it. But, they really didn’t take advantage of it. They really didn’t gamble. They didn’t hike or do much in the outdoors. But, they did like they high desert.

This picture was made made on a cool November evening when rain hadn’t turned to snow yet. It is one of what I call — Ray’s Pictures – slow shutter speed, at night, little bitty flash popped in there to give some shape to something.

Something a little different. Not much text except to say that in Albuquerque, on this day, the Memorial Day services were dedicated to the remaining WWII vets. The Greatest Generation. 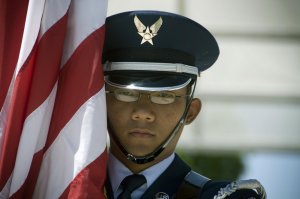 There is a very nice veterans memorial park in Albuq- uerque. It is near the National Guard main head- quarters and near Kirtland Airforce Base which makes it located appropriately. It is quite pretty. And, it seems to reflect the seasons very well. I’d like to call this image, “Before Me.” As it turns out, the man holding his son is an Iraqi War vet. He’s a pretty young guy. His looking at the black granite wall that is dedicated to military personnel who fought and died in the Vietnam War. His dad served during that war. If you look closely, you can see me in the picture too. 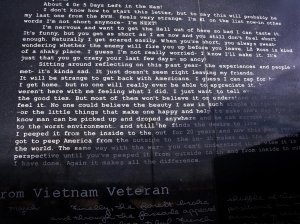 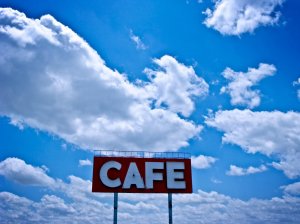 Like many places, New Mexico has many nicknames. So do the towns and cities. For instance, Santa Fe likes to call itself, “a city different.” I moved here from New Orleans, I’ll give you a city different. Albuquerque likes to call itself “Burque” or “The Q.” Those are all newer, trendy names. More traditionally,
New Mexico is known as the Land of Enchantment. Some enchantment. With it’s very dry air there is very little rust and old stuff just lies or stands where it has been abandoned, sort of hurting that ol‘ enchanting feeling. There’s tons of this stuff scattered in the deserts of the Southwest. When I photographed this sign against the blue sky, I started looking for remnants of the cafe. There was barely even a cement slab left from where it had been. But, the sign still stood, probably after at least ten years. That’s fine. It made one of those strange pictures that I like. But, it sure is a bad way to treat the land and the sky.